In recent years, a new environmental problem that has been identified is sea desertification, meaning that the sea becomes like a desert owing to disappearance of seaweed from the water. The environment for growth of marine life deteriorates when this happens, causing serious damage to coastal fisheries. It was found that a decline of iron, which has been carried from the forest areas to the sea in river water, is one of the causes for sea desertification. To offset a part of the decline in the supply of iron from nature, Nippon Steel has created iron supply units composed of humus, soil and steel slag, the latter being a by-product of the steelmaking process that is rich in iron. Nippon Steel is supplying this product and promoting regeneration of seaweed beds.

▶ See the video of the Sea Forest Creation

* Sea desertification: With a decline in kelp, brown seaweed, and other varieties of seaweed, the sea bed loses ability to support life.

Six months after installing iron supply units, kelp grew nicely 30- meters from where the units were placed. After two years and again after three years, it was confirmed that the positive effects had continued. (Mashike Town, Hokkaido)

At the Wakayama Steel Works, Nippon Steel is carrying out a test using converter slag reef blocks in a reef habitat for fish. In October 2008, 12 converter slag reef blocks (each weighing 7 tons) were sunk in the coastal area of Shimizu-ura, Kainan City in Wakayama Prefecture (Kainan City Fisheries Cooperative). Since then, we have been observing the changes in the distribution of marine life, attached sea creatures, fish, and shellfish.

The types of sealife observed were the following. 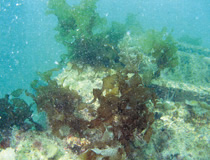 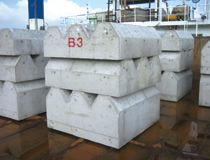 Nippon Steel promotes the “creation of marine forest” to counteract the “rocky-shore denudation,” which has been a nation-wide environmental concern in recent years.

One of the causes of the “rocky-shore” phenomenon is the decreased supply of iron hich is necessary for kelp and seaweed to grow hrough rivers as a result of deforestation and upstream development. To cope with this problem, in 2004, we developed an iron supply unit containing humic substances made of iron/ steel slag and waste wood. Since then, we have been working on creating a seaweed bed (marine forest). 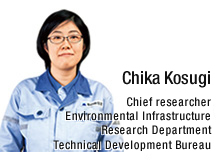 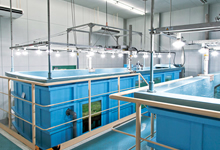