Nippon Steel & Sumitomo Metal Corporation (NSSMC) was recognized as one of the world’s top 100 most innovators, by receiving the “2016 Top 100 Global Innovator Award" for the fifth consecutive year. The award was sponsored by Clarivate Analytics (formerly the Intellectual Property & Science business of Thomson Reuter; based in Philadelphia, U.S.; Japan office in Minato-ku, Tokyo). The award was presented with a trophy today, February 27.

This award, now in its sixth year, gives recognition to the world’s most innovative companies and institutions which have protected and commercialized unique innovative as intellectual property. The award selection methodology is based on four criteria; patent volume, patent-grant success rates and invention influence for the past five years, and global reach for the past three years.

In selecting NSSMC, Clarivate Analytics commented that NSSMC was selected for the fifth consecutive year given its particularly high rating in consistent “success rates,” suggesting NSSMC’s intellectual property activities are based on the high level this activity has in the company’s strategy. 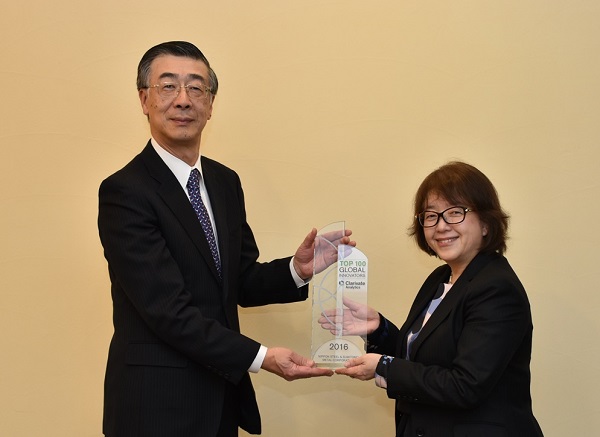 
Of the world’s top 100 innovators named for 2016, 34 are Japanese companies, (there were 40 in 2015). Among them, NSSMC is the only steel company given an award for a fifth consecutive year, from 2012. We feel honored that our many years of R&D activities and intellectual property creation have won us objective recognition as one of the world’s most innovative companies.

We aim at contributing to the progress of society through pursuit of world-leading technology development and manufacturing strength, and provision of excellent products and services. We are committed to continue extensive R&D activity, protect and utilize the resultant intellectual property, and thus support our global business development.