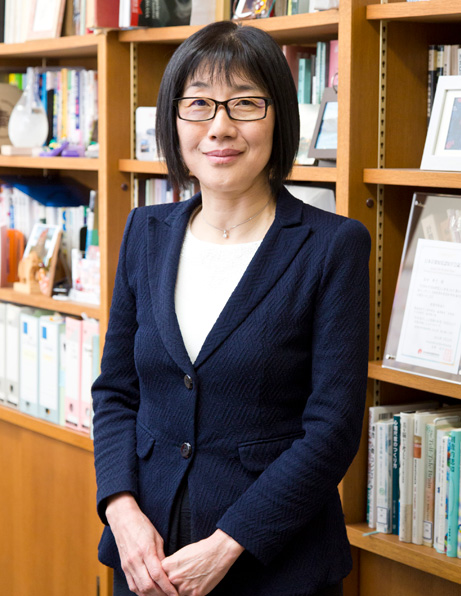 Professor of the Department of Human System
Interaction, School of Science and Technology, Kwansei Gakuin University

Director of the Research Center for Kansei Value Creation

●You are working on the Kansei (emotional) engineering, Prof. Nagata. What is the study about?
To put it briefly, the study is conducted to scientifically understand human emotions. When creating a product, how can it gain sympathy from consumers and impress them? I am working on the study to approach the issue from the properties of an object and quantify and model the relationship between emotion and physicality.


●Could you be a little more specific? What kinds of research have been done so far?
Well, the most recent case was a joint research project with a cosmetics maker. For example, the phrase “transparent skin” is one of the keywords that express a beautiful skin, while there was no clear definition of the word.
So, we collected words to express impressions of natural skin and made-up skin and modeled them. As a result, we found that there is a difference in the meaning of transparency between the two types of skin. For natural skin, visual information, such as natural feel and fine texture, determines the skin’s transparency. On the other hand, when it comes to skin with make-up, elements appealing to the sense of touch such as mild and smooth textures strongly make people feel the transparency of the skin.
The fact that people feel differently about transparency between natural skin and made-up skin was a major discovery for us. With the study results in mind, the cosmetics maker built the concept of “transparency in the sense of touch”, and developed a new powder foundation.


●It is interesting. In the first place, what motivated you to begin studying the Kansei engineering?
I joined an electric maker in 1988, and was engaged in the development of surface flaw inspection apparatus for steel materials, among other tasks. However, it is a very difficult task, because its evaluation largely relies on human feelings and emotions. For example, products with flaws are not always rejected, but small flaws on patterned areas are accepted. Therefore, it is impossible to uniformly make such judgements using a computer. When I was wondering how to resolve the issue, I came to know the Kansei engineering advocated by Seiji Inokuchi, who taught at Osaka University at that time. I was very interested in the study because I had never heard of such a study that is aimed at scientifically approaching human emotions to use them for manufacturing.
Around that time, a pearl maker consulted me on whether I could make a pearl appraisal device. A pearl is about 0.5-millimeter thick and made from about 1,000 thin layers. Each individual layer reflects light. Since light has the same properties as a wave, the lights strengthen or negate each other, which creates the beautiful colors unique to pearl, such as pink and green. The phenomenon is called thin film interference, and how the colors are produced is one of the factors to determine the value of a pearl.
In order to develop such an appraisal device, it was necessary to define the beauty of a pearl. So, to begin with, I conducted hearings on pearl appraisers to collect words concentrating on the emotions of experts, including those related to twists, shininess, and modesty (laugh). Then, I started with creating a value model of pearl based on the words, although I was told by my superior that I should not conduct such unprofitable work at that time (laugh). However, I managed to complete an appraisal device. This experience led me to decide to fully study the Kansei engineering. So, I studied under Prof. Inokuchi and obtained a PhD at age 35. 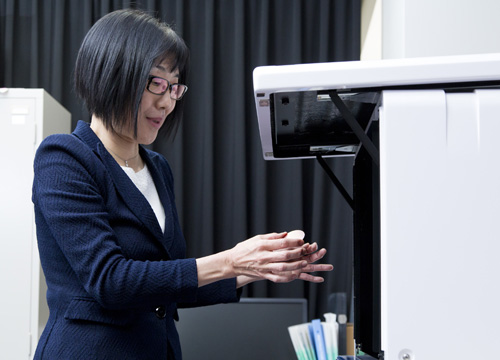 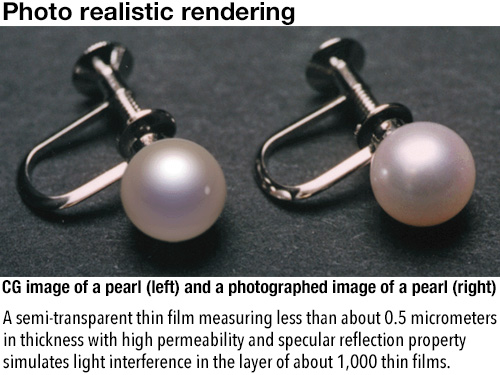 Same color production mechanism applies for both titanium and pearl

●We heard that you have used “TranTixxii” as a research object. Could you tell us about your impression when you saw “TranTixxii” for the first time?
I was surprised because it has so many beautiful colors. The colors of TranTixxii also emerge as a result of thin film interference, and I thought the mechanism was the same as that of pearl. So, I was very interested in the material. In addition, I wanted to closely examine how the interference colors are produced.
However, it was difficult to find the mechanism. Titanium is very interesting, because almost the same interference colors are seen from any angles. In other words, the same colors appear on areas with strong light and those with weak light, which is a totally different property from pearls.
First, I did not know the reason, and the issue troubled me for a long time. However, one day, I had an inspiration. If I assume that there are very fine irregularities on the surface of titanium and these irregularities reflect light in multiple directions, then I can explain the reason very well. In this way, I could understand the color production mechanism, and I succeeded in recreating titanium’s interference colors in CG.


●Besides the beautiful colors, does TranTixxii have other charms that attract you?
TranTixxii does not go rusty, while being light and strong. In addition to such excellent properties of the material, its existence itself is very natural. It does not give a sense of discomfort even when it exists in a scene of nature. One of the reasons for that is gradations. All colors in nature have gradations, such as sky, ocean and trees. We feel nature in them without being aware of it.

In addition, there are many surface finish variations, and what is interesting is that the impression differs depending on variation. I conducted an experiment to evaluate the impressions given by each surface finish of TranTixxii. For example, the blasted finish gives impressions such as “delicacy, calmness, familiarity, etc.” so it is suitable for traditional buildings such as temples and shrines. The roll-dull finish is good for modern architecture because it gives a “luxurious” image. The anodized color finish has a high attention value, so it is suited to design-centric architecture.

Its beautiful colors, natural feel, and finish variations generate a synergistic effect to enhance the attractiveness of TranTixxii. I think the material inspires the imagination of users, such as designers and architects, in various ways.


●Fortunately, it is used for many buildings as a designing titanium, and we receive reviews that it matches cultural assets such as Tokyo’s Sensoji temple’s roof tiles.
They are outstanding, aren’t they? Uneven burnt parts are also reproduced. Everyone will believe they are genuine tiles. Furthermore, compared to real tiles, they are lighter and more durable, so they can be used for longer periods of time. I think protecting traditional assets with such new technologies is of great value.

I served as a member of the Hyogo prefectural board of education. I know there are many people who are enthusiastically working to preserve various cultural assets for future generations. It will be wonderful if we can work together with such people to protect cultural properties by using TranTixxii. If it is realized, how lucky I will be as an engineer.


●How about its potential as a material?
I believe it has great potential. Different from painting, its colors do not wear, while it has beautiful gradations like those in nature. In other words, it imitates nature, so it could replace anything around us. I can go so far as to say that it can replace trees, stones and flowers. If processing technology advances enough to change the thickness of a material from part to part, it will be possible to create wood grains.
Meanwhile, we can of course use TranTixxii in a way to emphasize its beautiful metallic colors. A typical example of such usage is a hotel in Spain (*). (*Hotel Marques de Riscal,” designed by globally renowned French architect Frank Owen Gehry.)
As a construction material, it is used mostly for the exteriors of buildings such as roofs and outer walls, while it will be interesting if it is used for interiors in the future. Actually, there is increasingly growing interest in interior environments, such as colors. For example, what kind of room will help people relax or make progress in their study? My laboratory has received such research requests. How will people feel when titanium materials with a natural feel, like TranTixxii, are used for interiors? I think it is an interesting theme.
In any case, it is great that users actively use it with innovative ideas. Then, we want to receive feedback from them, as to what colors are needed and what textures are desirable. Through such processes, it will be improved as a material, which I believe is ideal.


●Will TranTixxii continue to be a research theme for you?
Yes, of course. It is quite a rare material that can produce such beautiful interference colors. Since pearl is a natural object, I think titanium is the only industrially mass-producible artificial material that can produce interference colors. Also in that sense, it is a precious material with great potential. I would like to explore the charms of the material as a research object going forward.