Nippon Steel Corporation’s NSafeTM-Hull1, highly-ductile steel plates with outstanding collision safety performance, and NSGPTM-12 and NSGPTM-23, highly-corrosion-resistant steel plates used in crude oil tankers, have simultaneously been adopted for the first time in the world in leading-edge ULCCs (Ultra Large Crude oil Carriers) (deadweight: 310,000 DWT), which were newly developed by Imabari Shipbuilding Co., Ltd. Four ULCCs which will simultaneously adopt all of these steel plates were ordered by the Navios Group from Imabari Shipbuilding in 2018.

Approximately 3,000 tons of NSafe-Hull highly-ductile steel plates were adopted per ship for parts which require high collision safety performance, such as outer panels of side shell plating of cargo oil and fuel oil tanks. Thanks to their high ductility, a crude oil tanker employing NSafe-Hull is less prone to rupture than a tanker made of conventional steel at the time of collision, which enables a reduction in the risk of serious marine pollution caused by the leakage of cargo oil and fuel oil. NSafe-Hull has obtained certification from Nippon Kaiji Kyokai (known as ClassNK or NK) and the American Bureau of Shipping (ABS) as a steel plate with over 50% higher ductility than the regulatory required level for conventional steel. After being first adopted in 2014 for large-sized bulk carriers built by Imabari Shipbuilding, NSafe-Hull’s high safety performance has become highly regarded, leading to its adoption in 12 vessels, mainly large-sized bulk carriers, and total orders received have exceeded 20,000 tons.

Moreover, approximately 9,000 tons of NSGP-1 and NSGP-2 highly-corrosion-resistant steel plates have been adopted per ship for the fuel oil tanks of crude oil tankers. In 2011, NSGP-1 was the first in the world to receive approval4 from the International Association of Classification Societies Ltd. (IACS) for use with no coating when it is adopted in the cargo oil tanks of crude oil tankers that should require anticorrosion coating. NSGP-2 also received similar approval in 2014. The lack of any need for coating on the bottom and ceiling parts of cargo oil tanks eliminates work such as the assembly of scaffolds required for coating and inspection at the time of construction and regular maintenance after completion. This results in a reduction in the cost of coating, a shorter work period, and ultimately contributes to a reduction in environmental impact. Nippon Steel began application tests for these steel plates in actual crude oil tankers in 2004 and started receiving orders in 2007. Having received a high evaluation for their high performance, these steel plates have so far been adopted in more than ten crude oil tankers, with total orders received exceeding 30,000 tons.

Due to their outstanding performance, NSafe-Hull and NSGP-1 received the Ichimura Prize in Industry for Distinguished Achievement5 in 2018 and 2010 respectively.

The Nippon Steel Group will continue efforts to seek world-leading technologies and manufacturing strength and contribute to the greater safety of vessels and the global environment by providing outstanding products and services that also match the Sustainable Development Goals (SDGs) adopted by the United Nations. 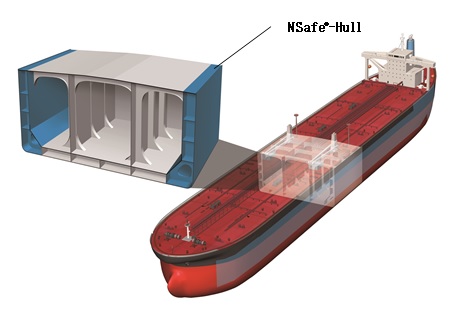 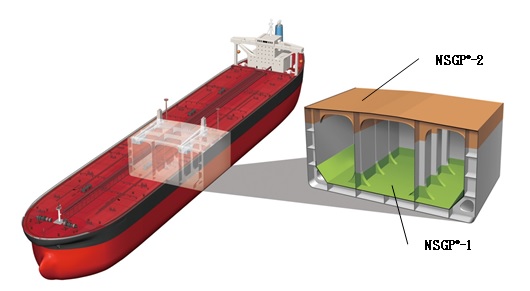