For a world-class LNG storage tank now under construction, “7% nickel steel for LNG tank,” developed by Nippon Steel & Sumitomo Metal (Chairman & CEO: Shoji Muneoka), has been adopted. The 7%Ni steel is to be the first product to be designated as a new standard specification for LNG application in about half a century, being the world’s first of its kind developed and put to practical use.

1.Technological innovation after a lapse of fifty years
For LNG that is stored at cryogenic temperatures under -162℃, steels for storage tanks need to have high fracture toughness and strength in low-temperature service. For this reason, 9%Ni steel containing 9% of nickel that is outstanding in these required characteristics have been the main stream for over half a century.
To high-nickel steels, we applied the thermo mechanical control process (TMCP) for the first time. This application of TMCP and the optimization of chemical components permitted the world’s first development of “7%Ni steel,” to slash an amount of nickel by about 20% and to possess high safety and strength equal to 9%Ni Steel, namely to combine resource saving and high performance.


2.Adoption for a world-class tank
Toward the commercialization of 7%Ni steel, we conducted joint studies with Osaka Gas, which has led the world in LNG tank technology, and Toyo Kanetsu K.K., a tank fabricator, with the result that, in FY2010, by an official assessment by the Ministry of Economy, Trade and Industry, 7%Ni steel was found conforming to the technical standards for gas engineering structures and possessing properties equal to those of 9%Ni steel. Accordingly, 7%Ni steel has been adopted for the No. 5 LNG tank at Senboku-I Terminal (Sakai City) of Osaka Gas.
The Senboku-I No. 5 tank with an inner volume of 230,000m3 is a world-class LNG tank. Construction started in September 2012, with completion scheduled for 2015. This project uses about 3,800 tons of 7%Ni steel, with the maximum thickness being about 50mm.


4.Future steps
This year, 7%Ni steel was incorporated in the Japanese Industrial Standards (JIS) as designated SL7N590 in March and an ASME Code Case 2736 & 2737 in June, soon to be an ASTM specification A841 grade G also. Steps are being taken to obtain specifications needed to facilitate the spread of this new product.
Natural gas, long drawing public attention as a clean source of energy, and now brought into focus by the mining breakthrough (shale-gas revolution), is expected to grow strongly in production and demand in future. To transfer and store natural gases efficiently, liquefaction is needed, thus holding out future increases in demand for steels associated with LNG transport and storage.
Based on the adoption for the Senboku-I No. 5 tank, we are going to further promote the use of 7%Ni steel for new LNG tank installations both in Japan and other countries, responding to expanding LNG demand. 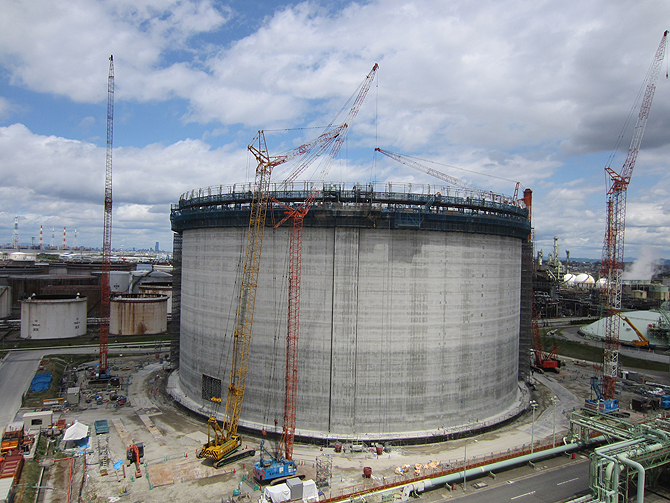 The No. 5 tank under construction at the Senboku-I terminal. 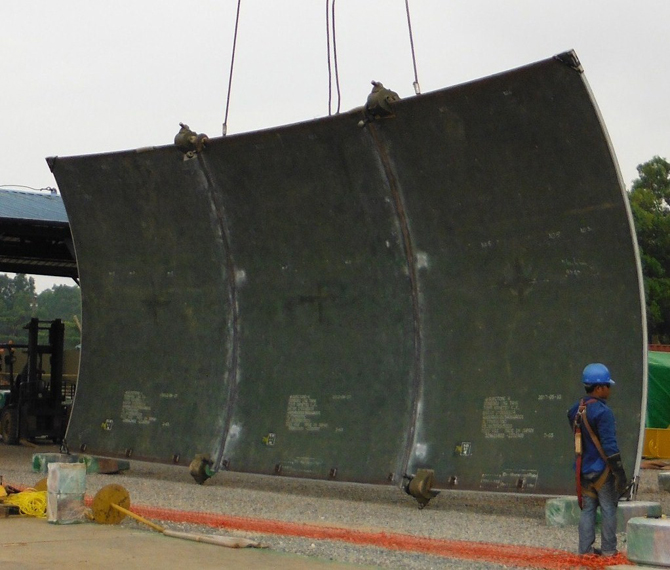