The NSSMMC has won 30 Gold Awards in total and achieved a new record of receiving its 26th consecutive Gold Award from 1987 to 2012. It also received its 20th Minister of Health, Labour and Welfare Award, which is given to the best chorus in the Company Division. It was also qualified for the finals of the 66th JCA National Choral Competition to be held in the Chiba Prefectural Culture Hall in November 2013.

The NSSMMC was renamed due to the integration of Nippon Steel Corporation and Sumitomo Metal Industries, Ltd. on October 1, 2012. On this occasion, the chorus released a CD album, celebrating its achievement of receiving 25 consecutive Gold Awards from 1987 to 2011, which is unprecedented except in the High School Division. 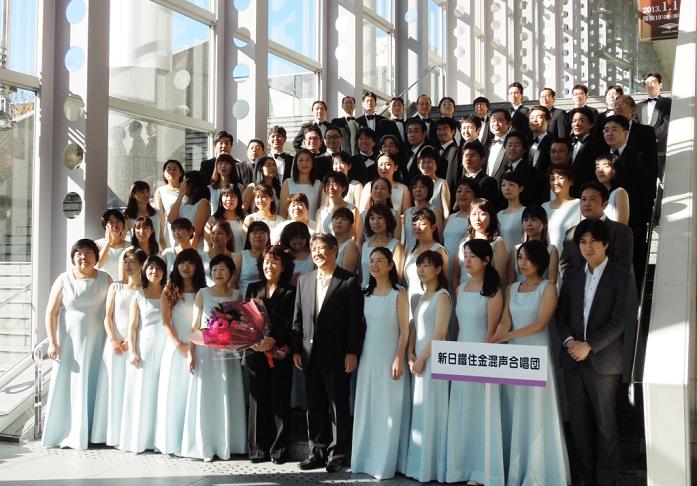 1. Performance
Compulsory piece: “Sing Lullaby”
(Words by Frederic Harvey and music by Herbert Howells)
Both Harvey (1888-1957) and Howells (1892-1983) were born in Great Britain. This simple yet beautiful English piece has the main melody of “to Jesus, born in an oxen-stall,” “to Jesus, born now in Bethlehem,” and “to Jesus, the Saviour of all,” which is passed from male voices to female voices, while the sweet delicate phrase of “Sing lullaby” is refrained in the background.

Self-chosen piece: “Concerto for Mixed Chorus, the Second Movement”
(Words by Grigor Narekatsi and music by Alfred Garyevich Schnittke)
The Armenian monk and poet Grigor Narekatsi (951-1003) wrote this poetry in his late life, with quotes from 'The Book of Lamentations,' which praises devout faith.
Composer Alfred Schnittke (1934-1998) is from the Saratov Province of Russia. His “Concerto for Mixed Chorus” is a choral masterpiece in four movements and requires dramatic vigor in singing.

The NSSMMC found it challenging to differentiate the singing of these two religious pieces: the compulsory piece had a delicate tone while the self-chosen piece required rich voices with great volume. Singing in Russian for the self-chosen piece was more difficult than singing the English words of the compulsory piece. However, in the competition the chorus members were pleased with their performances of the two pieces in which their rich, great harmony was heard throughout the concert hall.

In addition to participating in competitions, the Chorus holds periodical concerts in Osaka once every four years or so, gives concerts at various locations of NSSMC’s operations, and is invited to play at local concerts such as in Okino-shima islands in Shimane prefecture and Koriyama-city in Fukushima prefecture.
In July 2012, the Chorus held a concert in Kitakyushu-city, where NSSMC has the Yawata Steelworks and the Kokura Steelworks. On May 7, 2013, the Chorus plans to hold its next concert at Kioi Hall, which was constructed in Chiyoda-ku, Tokyo, to commemorate the 20th anniversary of the founding of Nippon Steel Corporation in 1995.